Getting a better CNC

My 3020 CNC was a nice introduction into CNC, but it also did leave much to be desired. Especially when it comes to working with harder/thicker wood or even metals. So the time has come to get a more powerful machine! 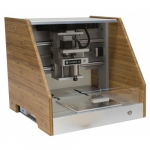 Wanting to spend at most 2500 euros, there’s a bunch of interesting options available. Lots of people seem to like Carbide3D’s Shapeoko 3 or Inventible’s X-Carve. But these are mainly used as wood routers, and a bit large for my hobby room. Carbide3D’s Nomad 883 Pro seemed to be much closer to what I was looking for as it’s more compact, silent and precise. And its electronics and software seems solid as well. However, as I’m living in Europe, buying and importing American products isn’t cheap.

Sadly, there doesn’t seem to be that much (well-known) competition from European products in the price range I’m looking for. There are, however, some Chinese products you can import that seem to be built a lot better than the entry-level Chinese hobby machine I started with. Obviously, importing a machine from China is relatively risky. Forget about customer service and lively communities; if there’s a problem, then you’re pretty much on your own. Also, Chinese CNCs aren’t typically known for the quality of their electronics, and any included software may be cracked and outdated.

Nevertheless, electronics and software are easier (for me) to upgrade than a CNC’s frame. That’s why I ended up ordering the Chinese machine below via AliExpress. It has a thick solid metal frame, a 2.2kW spindle, linear guides, ball screws, 3A stepper motors, and a spindle & material water cooling system. The included control box contains a Mach3 USB board, DM542 stepper motor drivers and a VFD invertor. In total, this ‘only’ costed me 1800 euros. 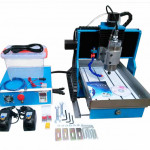 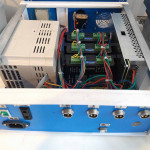 Inside its control box

When the 100 kg crate got delivered, I was very pleased. This was such an upgrade in sturdiness compared to my old plastic-based frame and circular-rod-based guides. It moves the heavy 2.2KW spindle without any problems, and the spindle purred like some futuristic kitten. Sadly, I was less impressed by the control software. The Mach3 USB board was, well, let’s call it ‘unofficial’, and would instantly freeze the laptop when I wanted to jog the machine. Not a great start. Also, not having worked with Mach3 before, I was a bit surprised by how ancient this software seemed. I’m sure it’s useful and very tweakable in its own way, but I would prefer something more modern. 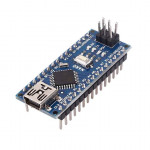 So I decided to make my new CNC GRBL-based instead. There’s a large community surrounding GRBL, and it runs on hardware I had laying around the house anyway: A laptop and an Arduino board. It may not be the most feature-rich and proven system out there (e.g. it only supports 3 axes), but its motion planner is supposedly quite good, and I can extend it in any way I want as it’s completely open source. It’s possible to buy GRBL breakout boards that are ready to go, but I ended up making my own from scratch to get it to work just the way I wanted to. In the next post, I’ll cover this in some detail, together with some other upgrades I made to the machine.