Being a software engineer, I love creating virtual things. But with a 3D printer or CNC machine, it’s also relatively easy to start making complex physical things. I say relatively easy, as there’s still a steep learning curve you have to get through, especially for CNC. Nevertheless, I prefer CNC over 3D printing because it can modify already existing objects, can handle a wider range of materials like wood and plastics including polycarbonate, as well as make circuit boards. This last ability is really nice for a maker, as it makes experimenting and iterating with electronics quick and cheap. 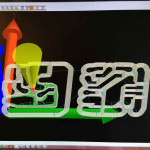 Last year, I bought my first CNC machine for about €400: A brandless “3020 CNC” from AliExpress that has a work area that’s slightly under 30×20 cm, a thick plastic frame, and a spindle running at a fixed 11,000 rpm. It included all the necessary components to get started, including a USB-based control box and a software CD. The CD contained different pieces of CAD/CAM software and patches (possibly to crack them). The software I ended up using exclusively was USB CNC Controller from Planet CNC, as the hardware was apparently based on Planet CNC’s deprecated Mk1 board.

I ended up appreciating USB CNC Controller quite a bit. Obviously, with my limited experience it’s hard for me to compare this to other software packages, but to felt both easy and powerful enough to keep on using it. It supports things like directly importing Gerber files, rotating/translating GCode, starting execution from a particular GCode line, and much much more. And from what I’ve seen, its interface and workflow makes more sense to me than something like MACH3, for example. 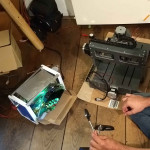 On the hardware side, I opted for a pre-assembled machine instead of a kit, believing I’d be able to get started quickly and easily that way. This turned out not to be the case in practice. For one, when I turned on my new pre-assembled machine for the first time, the spindle couldn’t be turned off. Luckily, I was able to solve this by rewiring some wires in the control box to the appropriate ports of the Mk1 board. Although its enjoyable to fix things, this was also the first clear indicator that going for a cheap CNC also means that you have to get creative sometimes, and treat the machine by itself as an ongoing project too.

Not much later, for example, I noticed that some screws in the plastic frame weren’t tightened properly or even misaligned, causing unnecessary slack and unnecessary obliqueness between the axes and the table. So the next step for me was to completely disassemble and rebuild the frame, after which it performed noticeably better.

Lastly, I also noticed that the Z axis dropped very slowly when it was cutting into wood, but not when it was moving without actually cutting into anything. After some trial and error, this turned out to be the lack of proper shielding in/between the cables; The stepper motors were apparently being affected by the electromagnetic noise generated by the spindle under load. In the end, I fixed this problem by running the original cable from control box to spindle through a braided copper sleeve.

Overall, it definitely took a bit of learning, debugging and DIY creativity before I was able to use this machine as intended. But all initial problems aside, it did open up all sort of new possibilities to me once I got it working, which is truly awesome. Especially having payed only €400 or so for it.