The Bernoulli distribution can be generalized to support more than two discrete states, where each state’s relative probability is linearly interpolated between two given extremes, evenly dividing the difference from one extreme to the other over all states. This article describes the properties of this discrete staircase probability distribution, together with a method to generate random samples from it in constant time.

The distribution has been useful to me to be able to quickly select a random item from an ordered set of any size n in constant time, where the first item is exactly n times more likely to be randomly selected than the last one, and so a=n and b=1 (or equivalently, a=1 and b=1/n). One practical application of the distribution would be to generate random playlists from a user’s top 1000, preferring the highest ranked songs, but mixing in less preferred songs once in a while as well. Another application would be to use it for selecting parents in a genetic algorithm, typically selecting the most fit individuals for breeding, but giving less fit individuals a chance as well.

As a side note, it’s quite likely that the ‘discrete staircase probability distribution’ has already been described by other literature under a different name. But as I couldn’t find it and had to derive it myself, it made sense to write a post about it as well, as I’m sure it could be used to solve many more practical problems. 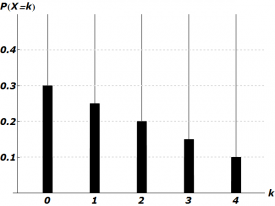 Below is a list of the most important statistical properties of the discrete staircase probability distribution. How they have been derived is the topic of the last section of this article.

When the transform for a \neq b is implemented naively in software, floating point rounding errors could potentially result in out-of-range output. The following efficient C++ implementation handles these rounding issues robustly. However, if n is a lot larger than 1,000, be sure to use a Mersenne Twister implementation instead of rand() to prevent specific states to be generated more or less often than expected (or even never). Also, if n is larger than 100,000, use double instead of float for the same reason.

In the sections below, the mathematical derivation of the distribution’s most important statistical properties is provided.

Again, let P[k] be the PMF (i.e. probability mass function) where 0 \leq k < n, k \in\mathbb{N}. Then, by the distribution’s definition, P[0] = ac and P[n-1] = bc. And as in-between states have a linearly interpolated probability, all the PMF’s probabilies will lie on a line passing through the values ac and bc at 0 and n-1, respectively. It’s easy to verify that the following linear function fits this description.

By using a 2nd order Lagrange polynomial to fit these points, we get:

As a side note, C'[k] could also have been rewritten into a recursive definition, from which the explicit formula could then be sought by solving the recurrence relation. This would probably have led to a more formal derivation, but the method above leads to the same result and is more direct.

Now that an explicit formula for P[k] has been derived, the mean \mu can be derived as well. By definition,

The variance \sigma^2 can be derived quite similarly. By definition, 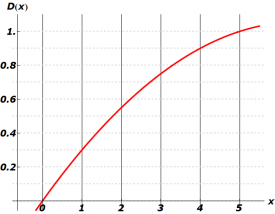 Now, suppose some continuous function y=D(x) has the property that D(k) = C[k-1]. That is, y=D(x) is a continuous function that is fitted to match certain discrete points defined by C[x]. Note that, because C[x] is a quadratic function, y=D(x) can be as well, making it a strictly monotonic function. Consequently, k \leq x < k+1 when D(k) \leq y=D(x) < D(k+1) for any sample y. In other words, each integer interval  k \leq x < k+1 (representing state k = \lfloor x \rfloor) in the domain of function D(x) maps to a specific range, which will contain any random uniformly generated sample y with probability P[k]. And conversely, that means that k=\lfloor D^{-1}(y)\rfloor maps any uniform sample y to state k with probability P[k]. 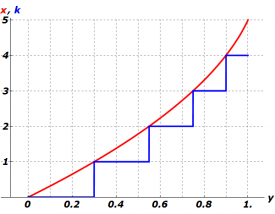 Yes, it’s an interesting poblrem, but I much prefer the 3-door game show puzzle, mostly because 99% of people (it’s good to throw in an arbitrary and made up statistic in the middle of a probability poblrem, right?) get it wrong and don’t understand why, even when you tell them the answer. While I’m sure you know the poblrem and solution, I’ll write the poblrem here for the sake of your many loyal readers. So suppose you’re on a game show, and you’re presented with 3 doors to choose from, one of which has a new car behind it, the other 2 have goats (or whatever, the point is you don’t want those doors). So you make your choice, but the host, instead of opening the door you chose, opens one of the other doors he knows the car is not behind. Then he present you with a choice, you can either keep your first choice or change your pick to the other unopened door. What should you do?Most people come to this conclusion, at the opening of the door, the probability that the car is behind either remainding door is 50-50, so it really doesn’t matter. And most will go one step further and say you should never second guess yourself so they’ll stick with their original choice. Well those people are most likely (2/3 of the time) are going to driving a goat to work. The correct answer is that you should always change your pick. The odds of winning when you change your pick are 2 out of every 3 times. Anyway, I’m bored at work and your poblrem reminded me of that poblrem and I thought it would make me sound smart. Enjoy.

Generalization of Bernoulli distribution would be something like this: you may encounter either event A, or B, or C with probabilities correspondingly p, q, r. (of course p+q+r = 1). Then question sounds like that: what is the probability to encounter event A – n times, event B – m times, event C – l times during n+m+l tries.

It would be an interesting question to find continous limit of this distribution. Bernoulli limit is Gauss distribution – and what will it be in this case?